From education to retirement to law

Ipswich couple present an open and shut case for giving back to community
TAGS:
Graduations, Faculty of Business Education Law and Arts

In 2017 Anne Bemi and Errol Way had been retired for nearly 15 years when they found themselves chasing a law degree each – all in the name of giving back to their beloved Ipswich community.

Both born and bred in Ipswich and married for 40 years, the pair met at St Edmund’s College, where Anne, now 67, was a librarian and Errol, now 82, was a biology teacher.

“Between us we have studied at five universities over our careers and upon retirement never envisaged either one of us ever returning to tertiary study – especially after decades working in education,” Anne said.

“But we found ourselves in a situation where more knowledge was needed and that led us to consider more study.”

In their retirement years, the couple volunteered their time with an advocacy group assisting with a wide range of social issues in residential parks.

“We enjoyed helping where we could and we got a lot out of devoting our time to people in need, here in Ipswich and all over Queensland,” Errol explained.

“A lot of the clients had difficulty navigating the legal and system and required additional support in court and tribunals so we helped where we could. Anne and I had a moment where it clicked that it would be useful to have more skills in this space.”

Anne said it was a big decision to make the leap from doing their own research as needed, to committing to a degree.

“Ultimately we made the decision to enrol at the University of Southern Queensland in a Bachelor of Laws because we wanted the mental stimulation to stop us fading into the background,” she said.

“It was of huge convenience to us too, to have the degree offered in person just 20 minutes from our own home.”

That was back in Semester 2 of 2017. This week, the motivated pair will officially graduate with a Bachelor of Laws each.

Errol describes the past five years as a ‘roller coaster ride’ – but an enjoyable one.

“In the early days computer skills were very problematic,” he laughed.

“It felt like if you paused for just 24 hours you were automatically behind when it came to the technology. But we both adapted and learned, and I’m really pleased how we’ve overcome the obstacles on that front,” he said.

Dr Margaret Voight from the University’s School of Law & Justice said the couple were an incredible example of going beyond expectations and proved it was never too late to learn more and make an impact.

“As Errol and Anne’s Course Examiner in the Law Clinic placement subject, their maturity, compassion and enthusiasm in helping the most vulnerable in our community was evident in their interactions with clients and colleagues in the clinical placement team,” Dr Voight said.

“Their passion for learning new areas of law and legal practice technologies, although challenging, seemed to be the catalyst to succeed and to help others.”
Anne said after their graduation ceremony the couple plan to catch up on ‘retired life’ before completing their practical legal training to become fully certified.

“We have to be realistic about our age and our emerging law career, but we’re both very keen to pursue serving in some capacity in community law in the future,” she said.

“We’ve been so very fortunate to have such a unique opportunity on our doorstep and be involved in a law program that is so highly regarded.

“A lot of good things had to align and come together to make this a reality for us both and I couldn’t be more delighted of what we’ve achieved right here in our hometown. It’s been such a rewarding and transformational experience.

“There really is so much to be proud of here in Ipswich and the University of Southern Queensland plays such a big part in that.” 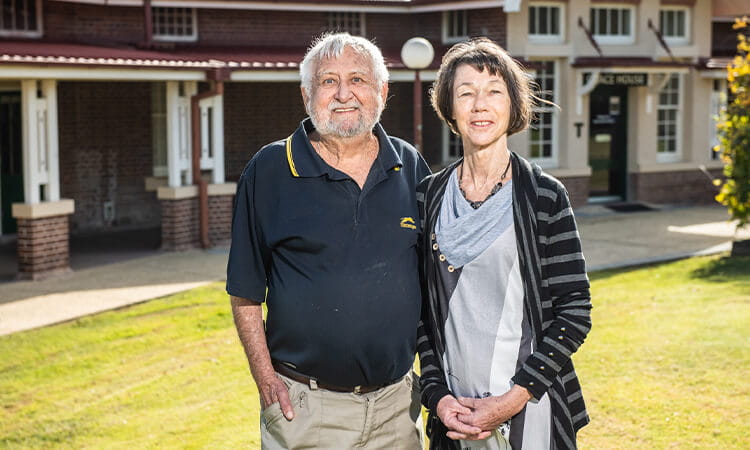