Law students had a glimpse of the future when they took to the Toowoomba Courthouse floor to battle out a mock court case.
TAGS:
Faculty of Business Education Law and Arts, Law and Criminology

The University of Southern Queensland Law students pleaded their cases before the Honourable Justice Martin Burns, a judge of the Supreme Court of Queensland, and barristers Nicole Friedewald and David Jones.

Runners up Sharna Cook and Fahim Gul put up a fierce argument honed by the tournament process where aspiring legal professionals argued each side of the case through two rounds, quarter and semi finals.

The night was made even more special with external students Ms Cook and Mr Gul travelling respectively from Geraldton in Western Australia and Wellington in New Zealand for the Grand Final.

“It’s an unforgiving and testing environment for the development of advocacy skills,” Professor Mortensen said.

“We aim, to the greatest extent possible, to simulate the hearing of an actual appeal. To have the students before a bench of three, including a Supreme Court judge, is as close as it gets to the hearing of a real appeal.

“They have to be as prepared, and to answer the same kind of questions, as the lawyers before the court.”

“We were incredibly impressed with the standard of competition this year and highly commend our 2022 winners Tracey Ellis and Deacon Johnston,” Ms Bowen said.

“As President, I am very proud of our current executive team for putting together this professional competition with special mention to Acting Vice-President (Competitions) Michelle Stenner.

“The University of Southern Queensland Law Society thanks the Queen's Arms Chambers for sponsoring this worthwhile tournament.”

The USQLS Championship Moot is a prestigious event offering a $2000 prize, open to any University of Southern Queensland law student who has completed at least eight law subjects. 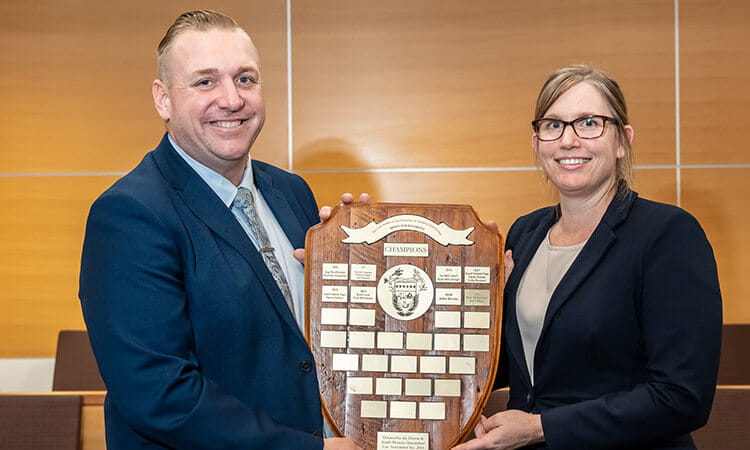