From the classroom to the courtroom: Teens make history at law competition

A case of a great final!
TAGS:
Law and Criminology, Study

Teenagers from high schools across the state have swapped their textbooks for law books as part of the University of Southern Queensland’s prestigious Secondary Schools Moot Competition, with underdogs from The Lakes College winning last night’s (September 8) Grand Final.

It is the first time the school has ever taken part, beating 22 other teams to secure the top title.

Hosted at the Ipswich Court House, the trio was cheered on by a full courtroom, including some of the country’s leading legal professionals.

For 16 year-old Molly Tulip, it was an inspiring moment.

“We’ve been training every single morning since April for this,” Molly said.

“And to stand up in front of Judes Dearden and Horneman-Wren and everyone else, it just felt so amazing.”

The North Lakes teen said she is counting down the days until she can begin her University studies.

“But after this case, I’m definitely more interested in civil law rather than criminal law,” she said.

The University of Southern Queensland Secondary Schools Moot Competition is now in its eighth year.

The highly distinguished event awards the winning team members with a full year scholarship to study Law at the University worth more than $43,000.

The University of Southern Queensland’s Bachelor of Laws and Juris Doctor degrees are nationally acclaimed, and can be done faster than anywhere else in Australia.

Find out more about studying Law at the University of Southern Queensland. 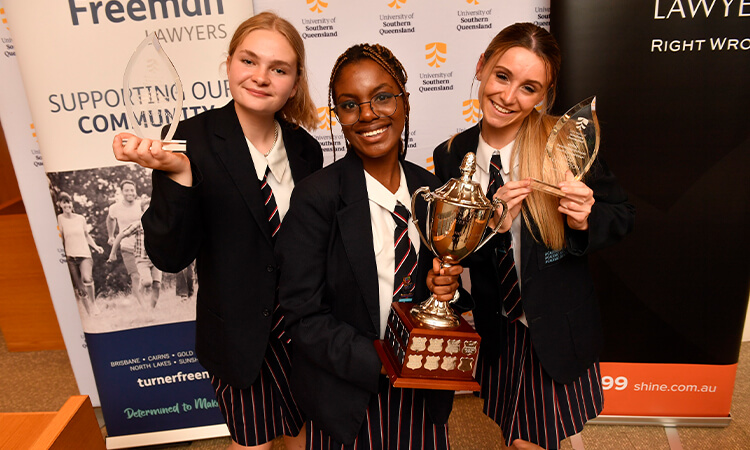