Ben Mortensen won a world championship for Australia in drone racing and started his own business before graduating from high school.

Now, the 18-year-old wants to turn his passion for drone flying into a career in surveying.

The University of Southern Queensland student started racing drones as a hobby when he was 14, but soon started taking it seriously as he worked his way up the ranks.

Drone racing requires pilots to manoeuvre custom-built drones through gates and past obstacles at speeds of up to 200km per hour using first person view goggles and a controller.

“Once you put the goggles on, you’re fully immersed in the thrill and excitement of competitive racing,” Mr Mortensen said.

“It’s like you’re inside the cockpit of a racing car, but instead, you’re in the air.

“The speed and sound of them certainly catch your attention, but it’s the journey drone racing has taken me on that I will forever be grateful for.

“The friends I have made, representing Australia and competing at iconic locations around the world like underground salt mines in Romania, the snowy peaks of Laax, Switzerland, and through the streets of Liechtenstein – I will never take any of that for granted.”

A gymnast in his early years, Mr Mortensen’s curiosity propelled him into the aerial sport.

“I didn’t know drone racing was a thing until I saw a story on the news promoting the national titles on the Gold Coast,” he said.

“I had never owned a drone or even flown one, but dad (Craig) and I thought it looked pretty cool, so we drove down to watch the final day of the competition.

“I was instantly hooked, and I wanted to take it up straight away.

“I even remember turning to my dad and telling him that I would be competing against them next year.”

He was true to his word.

After a bit of light research and a few ‘how to’ videos on YouTube, Mr Mortensen, with assistance from his father, had built his first racing drone.

His career quickly took off, and in 2018 he joined Rudi Browning, Thomas Bitmatta and Luke Godeassi to lead Australia to the team title at the Federation Aeronautique Internationale (FAI) World Drone Racing Championships in Shenzhen, China.

“It was an amazing feeling; all the hard work had paid off,” he said.

“I was thrilled to share this success with one of my best mates, Rudi, who I had met during my first local race meet and immediately took me under his wing.”

Shortly after the world championships, he used his prizemoney to start his own business called Profly Solutions.

“When COVID came, most drone racing competitions were postponed or cancelled,” he said.

“Drone racing had taught me so many different skills, which I wanted to put to good use.

“With dad’s help, I started my own business doing drone solutions in aerial photography and filming, such as solar panel thermal inspections and building asset inspections.

“It was a risk because I was only 16, and I could have used my earnings from drone racing to buy my first car.

“Instead, I wanted to set myself up for the future while taking on a new challenge and still doing something I enjoy.

“It has been so successful that I launched a second business (Digital Tours) earlier this year.”

When he’s not running his businesses, you can find the Ferny Grove State High School graduate at the University of Southern Queensland’s Springfield campus, pursuing a Bachelor of Spatial Science (Honours).

A recipient of a coveted Chancellor’s Excellence Scholarship, awarded to the most outstanding school leavers commencing an undergraduate degree at the University, the first-year student said he always wanted to turn his passion for drones into a profession.

“I have always found aerial mapping interesting, and surveying complements the skills I have learnt from drone photography and videography with my experience in drone racing,” he said.

“Studying is going great. It’s very flexible, and I can balance my businesses with my study, which suits me perfectly.”

While his drone racing days are grounded, for now, Mr Mortensen will have his drones in hand when he travels to Toowoomba tomorrow (May 25) and Thursday to deliver an educational presentation at this year’s Darling Downs Science and Engineering Challenge.

High school students from across the region will compete at the four-day competition, which starts today (May 24).

“Drone racing is a great STEM-based hobby, and it requires coding, maths and physics, which are all important for young people to learn and develop skills in,” he said.

“I hope my experience will push some people to take a similar path I did into drone racing or pursue something they’re passionate about in STEM.”

Are you interested in a career in Surveying? Click here to learn more about studying with Australia’s largest Surveying education provider. 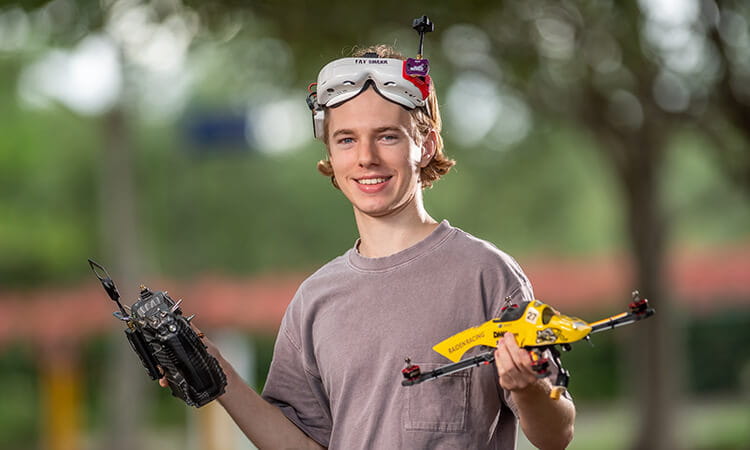