They say what goes up, must come down – and this is certainly true for space debris orbiting the Earth.

Working alongside a team of skilled scientists and engineers from the University and across the world, the pair are delving into how objects break up when returning into the Earth’s atmosphere.

“I had previously been working with defence, but I knew I wanted to focus more on the space sector,” Mr Hack said.

“So when I heard of this project through a fellow academic, I knew that it was everything I was looking for.”

“It was similar for me, I had been preparing to start a job in Perth when I heard about the project,” Mr Armstrong said.

“It sounded really interesting and I wanted to study something that would help me pick up more practical skills.”

While there is plenty of modelling on the break up and trajectory of space debris on re-entry, most rely on assumptions and calculations.

Combining forces, Mr Hack and Mr Armstrong plan to match their modelling with a range of physical experiments conducted in the University’s hypersonic wind tunnel, in what is one of the first ground based experimental studies into space debris dispersion.

“Obviously the simulations have an advantage as they are relatively inexpensive to run,” Mr Armstrong said.

“But the issue is you need physical data to validate them.”

“So in our work we will use numerical simulations to make predictions about how objects break apart, and then we will perform the physical experiments to confirm this data.”

“I love the fact that we are working on this as a team – all joined by a common goal,” Mr Hack said.

“We’re planning some exploratory experiments now, and once we get the results we will know what to hone in on.”

The pair’s research is part of a bigger project at the University, which is supported by an Australian Research Council grant.

PhD supervisor and University researcher Dr Fabian Zander said the aim of the study was to help improve the safe re-entry of orbiting objects.

“A classic example is the International Space Station – it’s not all going to burn up in the atmosphere, so how big will the surviving pieces be? And where are they going to go?

“You also get pieces with different velocities falling in different directions.

“This study aims to uncover how these pieces disperse, which will in turn help us to protect people and places should we have an uncontrolled re-entry.”

Further information about the ARC’s Discovery Projects scheme is available on the ARC website. 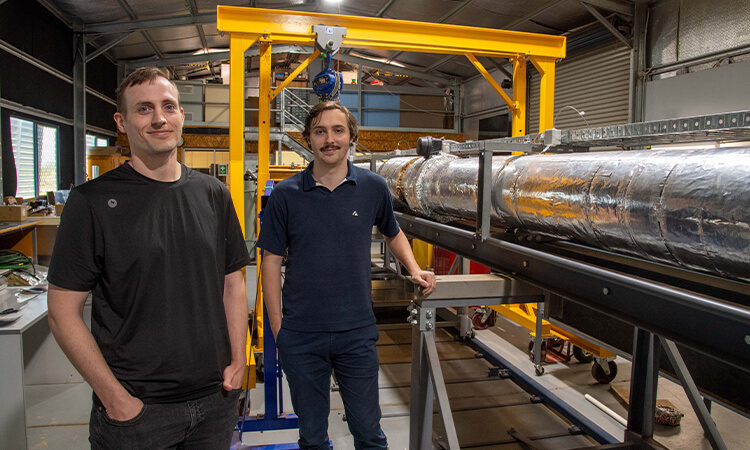 Gerard Armstrong and Flynn Hack have set out on an astronomical PhD project.