Resilience pays off for aspiring teacher

An A+ story!
TAGS:
Faculty of Business Education Law and Arts, Students

Bouts of glandular fever and tussles with quinsy, a complication of tonsillitis, put the University of Southern Queensland student in hospital during the most critical years of her schooling.

“It was tough because, on the one hand, I was extremely motivated to perform well in my assessments, but I was often so fatigued that I just couldn't complete anything,” Isabella said.

“I think I was a bit hard on myself as well – I was disappointed and frustrated when I couldn't get work done as fast as I'd planned or when I couldn't focus and stay awake.

“When I was feeling better, I would work extra hard to get a lot of studies done in case I fell ill again.

“This helped me stay on top of my assessments and avoid leaving anything to the last minute.”

Fuelled by a desire to pursue a career in teaching, she enrolled in a Bachelor of Education (Secondary) at the University of Southern Queensland’s Springfield campus.

Isabella was rewarded for her resilience and academic dedication with a Vice-Chancellor’s Scholarship, valued up to $20,000. It provides high-academic achievers with the financial support to reach their full potential, both during and beyond university.

She said the financial support had allowed her to put her best foot forward in her first year at university.

“I was very grateful to receive this scholarship as it’s one less financial stress I have to worry about in the future,” she said.

“It has reduced the demands on me to do a large amount of part-time work and given me more time to focus on my studies.”

Isabella will be formally presented her scholarship at an awards ceremony at Springfield on Wednesday (May 4). Another ceremony will be held at Toowoomba on May 3.

The ceremonies allow students to share their success with their families and friends and meet their scholarship donors.

Isabella said she was pleased with her decision to study at the University of Southern Queensland and was confident studying education would give her the skills she needed to find a career she was passionate about.

“I have always had a passion for literature and reading, and I would like to help younger people experience the positive, enjoyable side of English,” she said.

“I think it would be rewarding knowing that you've helped and made a difference for not just one, but hopefully many students.”

Learn more information about scholarships at the University of Southern Queensland. 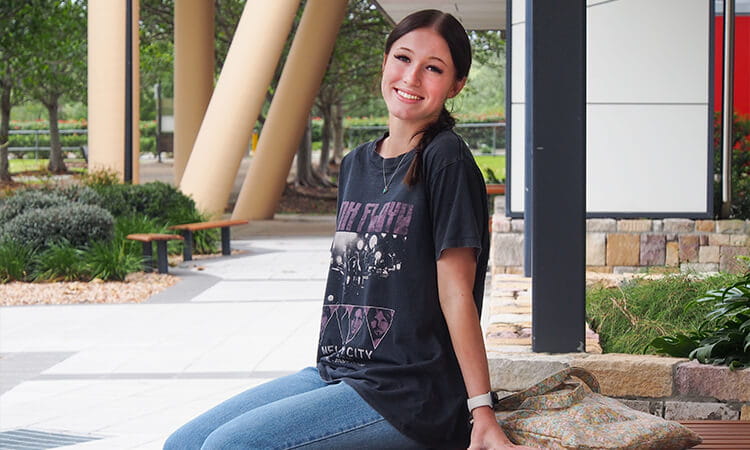 University of Southern Queensland Education student Isabella Weise was a recipient of a Vice-Chancellor’s Scholarship.