When George Zhou and Chelsea Huang decided to look to the stars for a future career they found more than just faraway worlds - they found each other.

Working hard in a laboratory at Princeton, the couple bonded over their search for exoplanets and love of the unknown.

And so their journey began, taking them upstate, to Harvard and the Massachusetts Institute of Technology, where they worked on different parts of the NASA Transiting Exoplanet Survey Satellite mission.

Now, years later and thousands of kilometres away, the couple is continuing their hunt for new exoplanets at the University of Southern Queensland.

“It was a big decision for both of us, but an exciting change,” Ms Huang said.

“We were looking for a place where we could develop our projects and the University of Southern Queensland has fantastic facilities.

“I had heard about the University’s team and the great work that MINERVA-Australis was doing while in the States – it’s really cool that we are now a part of it,” Dr Zhou added.

Having graduated with a physics degree, Dr Huang had initially entered the field of semiconductor research, while Dr Zhou completed his undergraduate and graduate studies in Astrophysics.

Coming from diverse fields, the two combined forces in the realms of research.

“After locating potential planet candidates, we would then forward this information on to George’s team for follow up studies.

“She would tell me about all the cool planets that she had found that day, and I would make plans on how to detect them from the observatories that we had in the US, Chile and here in Australia,” Dr Zhou said.

“It was funny, when I came home in the evenings, Chelsea would whisper about the exciting new finds that were coming my way.”

While their course might have been coincidental, many would say it was written in the stars.

“Ever since I was a child I was into science fiction - I always wondered if there was life out there, or other planets,” Dr Huang said.

“For me, my parents bought me a small telescope when I was five,” Dr Zhou said.

“Saturn was the first thing I pointed at – I saw the rings and I was hooked.”

Although they have reached their final destination in a journey across the world, their space exploration has just begun.

Find out more about Astrophysics at the University of Southern Queensland. 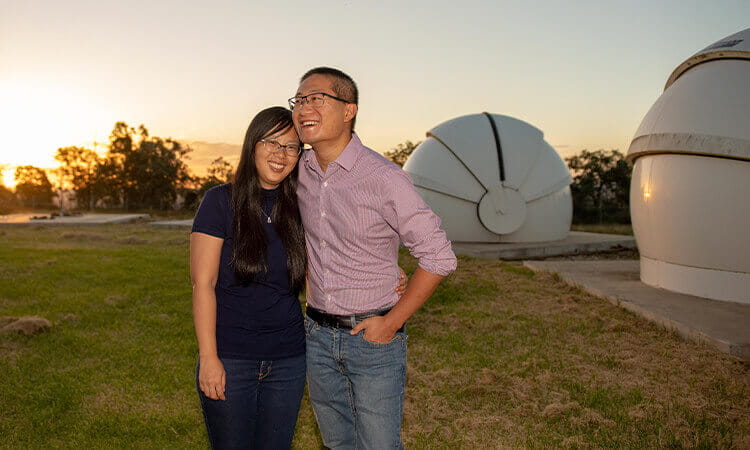