Clunky casts could be cast aside for “smart plaster”

New standard of care in years to come
TAGS:
Faculty of Health Engineering and Sciences, Research, Nursing and Allied Health

Smelly, clunky plaster casts used to treat fractured bones could be replaced by a shape-shifting material developed by University of Southern Queensland researchers.

The “smart plaster” is a hybrid shape memory polymer that, once heated, can be quickly wrapped around a fractured limb and fixed into a temporary shape.

“Plaster of Paris (POP) has been the most common treatment option for immobilising fractures since early 19th century, but POP and other common casting materials such as fibreglass have limitations,” Mr Jeewantha said.

“They can be uncomfortable, itchy and cumbersome to take off.

“Our smart plaster offers much more precise control over other immobilisation methods and provides better air circulation, reducing the chance of bacteria and infections.

“Shape memory polymers can recover their original shape after being deformed, which means our smart plaster can also be re-used.

“A major benefit is that it allows multiple alterations, which is not possible with a traditional cast.”

The application and removal process is also easier, quicker and cleaner.

“It takes less than 10 minutes to apply, which is much quicker than traditional POP or fibreglass casts, and you don’t have to wait a long time for the plaster to set,” Mr Jeewantha said.

“We also included a secondary locking mechanism, which makes it easy to remove and doesn’t require a saw that can scare kids.”

University of Southern Queensland Associate Professor Jayantha Epaarachchi, the supervisor of the PhD research project, said the smart plaster could be the new standard of care in years to come.

“We have done our part to produce a material that can provide comfort to patients, flexibility to doctors for frequent observation, easy and less time-consuming application for nurses and is relatively cheap and recyclable,” Associate Professor Epaarachchi said.

“This would be a turning point in the orthopaedic treatment process.

“The next logical step is in the hands of Australian manufacturers to take out this plaster from University of Southern Queensland laboratories, push it through medical certifying authorities and start large scale manufacturing, so the smart plaster is available in accident and emergency departments.” 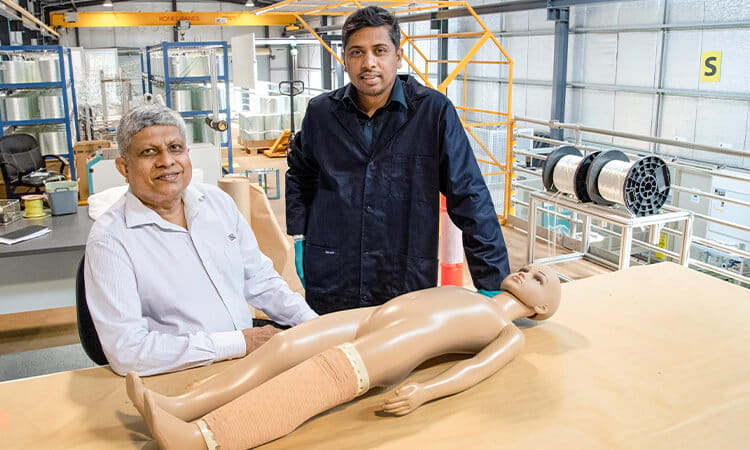