University of Southern Queensland study named as a global benchmark experiment, featuring at a NASA forum, where other scientists from across the world are encouraged to simulate the experiment
TAGS:
Astrophysics, Engineering

Cruising at speeds of close to Mach five, a commercial liner could fly from Sydney to London in under four hours.

Although still a dream, high-speed travel could become a future reality thanks in part to the work of a team of scientists at the University of Southern Queensland.

“We are really wanting to fly around the world much faster than we do now,” Dr Zander said.

“For example, it currently takes close to a day to travel from Sydney to London, but the goal would be to cut that down to four hours.

“Here at the University of Southern Queensland, we are lucky enough to have a unique facility, the hypersonic wind tunnel, which allows us to physically test models and concepts.

“It’s the only one in Australia, and one of a handful in the world, able to conduct these types of experiments.”

Dr Zander said improving the speed of travel would require breakthroughs in multiple fields of research.

“A lot of it is working on small aspects of these major problems and then trying to pull it all together.

“Currently, for a civil aircraft, we are looking at a speed limit of possibly Mach 4 to Mach 5, which is very fast considering at the moment we are not even travelling at Mach 1.”

Engine design, aerodynamic interactions and thermal management are some of the factors to be considered when it comes to high-speed flight.

“To be able to fly fast, and high, and sustain that for a long period of time, we need to recognise that the vehicles are going to get very hot and need a specialised propulsion system,” Professor Buttsworth said.

“So for this, we have to look at structures that can get very hot but still maintain their function and as well as a way to propel these aircraft.

“Then there are the many forces that are at play.”

Recently, the team has been studying the deformation of structures due to aerodynamic loading.

The study, which was conducted in collaboration with the University of New South Wales, has received international interest.

“While sitting on the tarmac, you will notice the wings of a traditional plane are drooping down, and during take-off, they bend upwards – this is an example of a fluid-structure interaction,” Professor Buttsworth said.

“This is relevant to high-speed flight as the vehicles need to be very lightweight, which means they are likely to deform a long way, and this can affect lift and drag.”

The study has now been named as a global benchmark experiment and is featuring at a NASA forum, where other scientists from across the world are encouraged to simulate the experiment.

Professor Buttsworth and Dr Zander are part of a team at the University’s Institute for Advanced Engineering and Space Sciences. Elements of their research form part of the University of Southern Queensland’s space manufacturing hub bid shortlisted for a share in $242.7m in federal government funding under the Australian Government’s Trailblazer Universities Program. 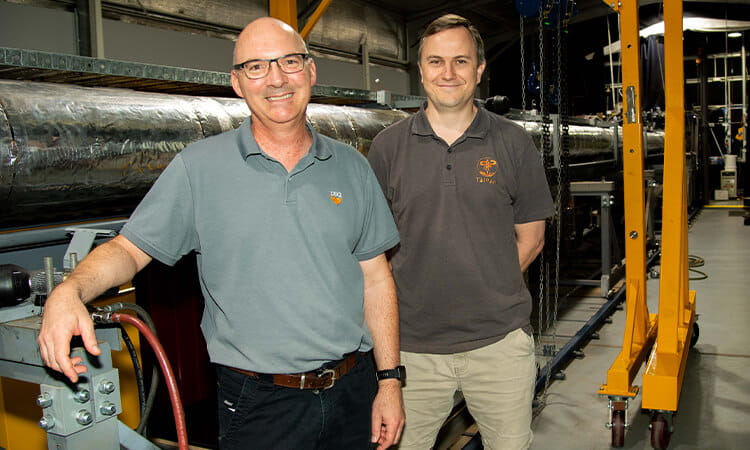 Professor David Buttsworth and Dr Fabian Zander are part of a team at the University of Southern Queensland’s Institute for Advanced Engineering and Space Sciences.