It was written in the stars!
TAGS:
Astrophysics, Sciences

Children are encouraged to reach for the stars - advice taken literally by space scientists like Dr Carolyn Brown.

As part of the University of Southern Queensland’s Centre for Astrophysics, Dr Brown has helped confirm exoplanet candidates for NASA’s Transiting Exoplanet Survey Satellite, investigated the activity of young stars similar to the Sun, and much more.

In addition to this data-intensive research, Dr Brown has also helped shepherd in new generations of astronomers and astrophysicists.

Her work as a lecturer has positioned the University of Southern Queensland as a provider of one of the country’s most comprehensive suite of astronomy courses in the country.

“I’m involved in post-graduate projects such as using the existence of Venus-like exoplanets to speed up the search for Earth 2.0; figuring out how to minimise false positives due to binary stars in the detection of exoplanets; investigating the impacts of enhanced ultraviolet radiation from an active Sun on the early Earth; New Zealand’s contribution to comet observations; and determining the accuracy of old southern sky double star catalogues.

“Beyond the lecture hall and tutorial zooms, I have also been heavily involved in outreach and engagement of astronomy in the community.

“I strive to foster the interest and knowledge of the new generations of astrophysicists as we attempt to understand the Universe and what it has to show us.”

International Day of Women and Girls (February 11), declared by the United Nations in 2015, is designed to recognise the critical role women and girls play in science and technology.

The University is also home to Queensland's only professional astronomical research facility, Mount Kent Observatory. The world-class facility includes an array of state-of-the-art telescopes and technology, bringing researchers and students at the forefront of ongoing planet discovery work. Learn more. 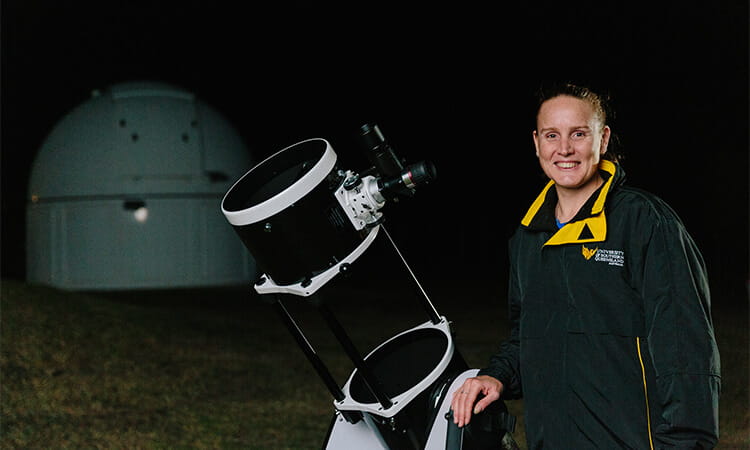