There’s something very shiny at the base of the Martian south polar cap.

An international team of researchers, including the University of Southern Queensland‘s Dr Graziella Caprarelli, believe it is salty water and new evidence backs up their theory.

Their findings, published in Earth and Planetary Science Letters this month, describes laboratory experiments that support the team’s 2020 discovery of a patchwork of salty lakes below the surface of Mars.

“It is generally assumed that the temperature at the base of the solar ice cap is less than -73℃, and we know that pure water exists only as solid ice at these subzero temperatures,” Dr Caprarelli said.

“However, our work suggests a group of salts found in Martian soil have an anti-freezing effect, and that brines formed by the liquefaction of these salts could be stable at these temperatures.”

The new research paper addressed alternative explanations for the source of the reflections such as clays or saline ice.

“Our experiments show that brines alone have the properties consistent with the bright reflections measured by MARSIS (a scientific instrument on board the European Space Agency’s Mars Express spacecraft), supporting our interpretation that liquid water exists at the base of the south polar ice.”

In addition to the University of Southern Queensland, the research team included Università Gabriele d’Annunzio in Chieti (Italy), Department of Mathematics and Physics at Roma Tre University in Rome (Italy), Southwest Research Institute in Boulder, Colorado (USA), National Research Council in Naples (Italy) and the National Institute for Astrophysics in Bologna (Italy).

Looking ahead, the team is keen to acquire more data from the south polar cap and apply similar analysis techniques to deposits at Mars’ north polar.

“There is a great deal more of Mars that we wish to explore,” Dr Caprarelli said.

“The team is currently making a case with the European Space Agency to extend the Mars Express mission (to which MARSIS belongs) until the end of 2025, to allow us to do even more observations.

“Our work has the potential determine the geological and climatic processes that formed the Martian polar caps and help with the many unanswered questions about the planetary evolution of Mars.

“Ultimately, greater understanding of Mars could one day lead to humans being able to land and potentially live on the planet.”

Read ‘Assessing the role of clay and salts on the origin of MARSIS basal bright reflections’ at Earth and Planetary Science Letters. 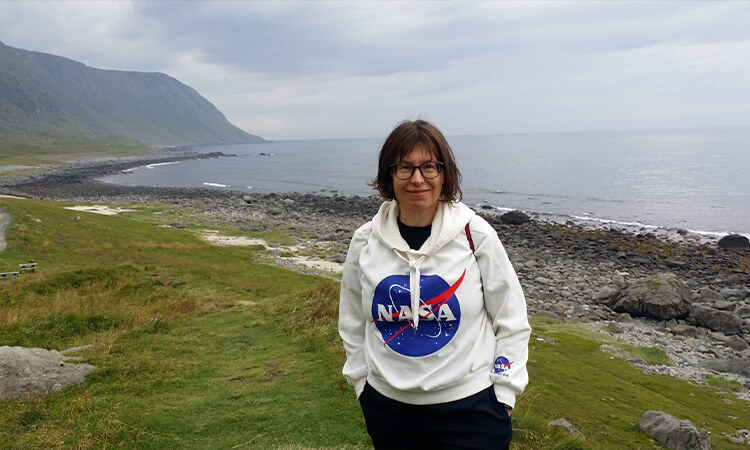