Picture flying across the sky at speeds greater than 5000kph.

This is what hypersonic aerodynamics aims to achieve, and although still in its infancy, it’s an industry that’s quickly taking flight.

Enter University of Southern Queensland’s Lachlan Noller, a PhD student with a focus on things that move fast, who was recently awarded a Queensland Defence Science Alliance Higher Degree by Research Grant to improve the capabilities of the University’s hypersonic wind tunnel.

Mr Noller plans to help upgrade the facility’s hardware so it can test the starting function of hypersonic inlets utilised on Scramjets, a form of air-breathing propulsion that gives the capability of moving five times the speed of sound plus.

He will do this by completing a new wind tunnel nozzle design.

“The new component will allow us to produce a larger airflow area which can generate a Mach 7 flow – which corresponds to a speed of approximately 8750kph,” Mr Noller said.

“The main part, which requires the bulk of the research and development, is the hypersonic nozzle which is used to accelerate stagnate, pre-compressed air up to the desired speeds.”

“Using this design methodology will provide us with evidence that the designed nozzle will indeed generate the desired flow conditions.”

He will be aided in this venture by the University of Southern Queensland’s Hypersonic Group, which includes Professor David Buttsworth, Dr Fabian Zander, Mr Alister Webb and Dr Byrenn Birch.

“To receive the grant is a testament to the hypersonics research team as a whole,” Mr Noller said.

“Had the team not had the reputation it has, which was built up over many years, I feel like my chances of receiving the grant would have been significantly lower.

“Additionally, I have appreciated the support and input of the team members.”

Already the longest duration hypersonic wind tunnel in Australia, it is hoped the new capabilities will allow researchers to expand their studies.

“And as space research expands, which includes the amplified importance of understanding how re-entering space junk breaks up, extending the capabilities of the UniSQ wind tunnel ensures that our research team can keep up with the current research needs.

“Never did I think in my undergrad that I would sign up for a PhD, but the opportunities and experiences I have been spoilt with in the Aerospace Engineering field so far have been unparalleled to anything else I would have encountered this early on after my undergraduate study.”

Learn more about Hypersonics at the University of Southern Queensland. 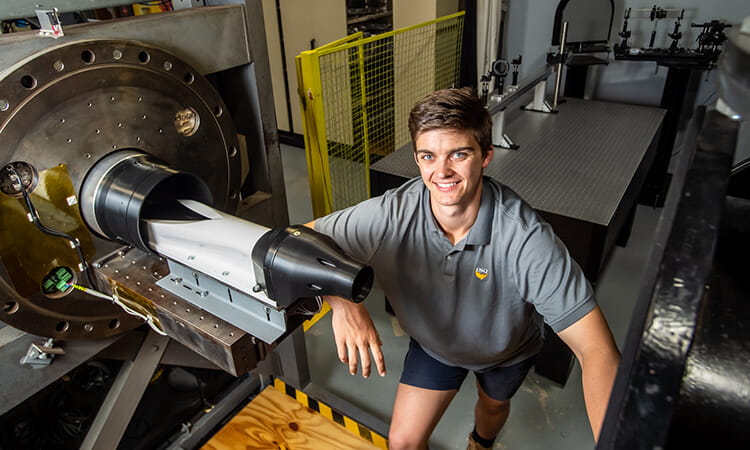