Two University of Southern Queensland paramedicine students have been recognised for their academic achievement.

Ebony Demnar-Brock and Scott Warren were announced as the inaugural winners of the Australasian College of Paramedicine Prize during an awards ceremony at the University’s Ipswich campus.

The Australasian College of Paramedicine is the peak professional organisation supporting and representing more than 10,000 paramedics and student paramedics from across Australia and New Zealand.

The $1000 prize is awarded to the top performing student or students in the Bachelor of Paramedicine capstone course Applied Paramedicine 2.

Ms Demnar-Brock and Mr Warren both undertook their degrees at Ipswich and will graduate early-next year.

Mr Warren said it felt good to be rewarded for all the hard work.

“I was completely surprised,” he said of receiving the prize.

“Academia has never come easy to me, but I have worked really hard, taken up every opportunity and put everything into this degree.

“I will put part of the prizemoney towards a nice dinner with my wife who has been so supportive over the last three years and the rest may go towards a new stethoscope I’ve had my eyes on.”

Ms Demnar-Brock said she puts her success down to her time at the University.

“I'm incredibly thankful to receive this award and proud of myself and Scotty,” she said.

“It caps off what was a life-changing experience for me at UniSQ.

“It gave me a chance to grow as a person and I was even lucky enough to finish with some beautiful like-minded friends.”

Ms Demnar-Brock and Mr Warren received their prizes from Elliot Rhodes-Bates, Chair of Special Interest Group - Paramedic Specialists and Practitioners at the Australasian College of Paramedicine.

The pair are now working through ambulance service recruitment processes in the hope of gaining a position in the industry.

The University of Southern Queensland acknowledges the gift from Australasian College of Paramedicine and all its donors for their contribution in support for academic excellence and the promotion of intellectual advancement. 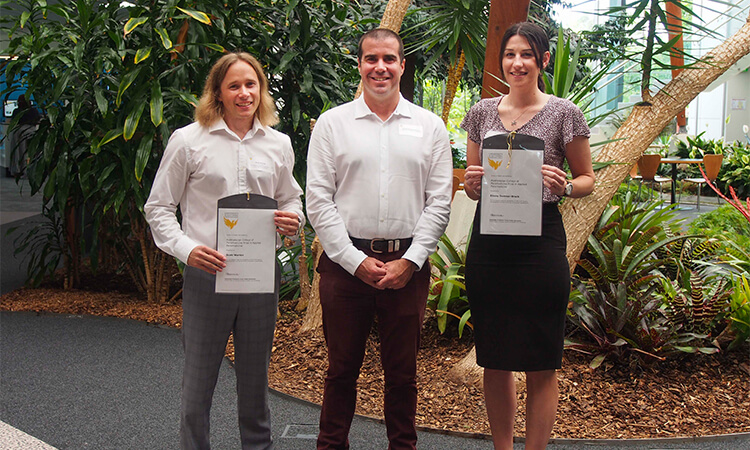 Scott Warren and Ebony Demnar-Brock were presented their awards by Elliot Rhodes-Bates.