It really was 'Lucy in the Sky' for one UniSQ researcher.
TAGS:
Staff, Sciences

After dedicating years to the study of a cluster of asteroids near Jupiter, University of Southern Queensland PhD candidate Tim Holt is set to get a clearer look at them thanks to the launch of a new NASA mission.

Jovian Trojans asteroids follow the path of Jupiter’s orbit around the sun and are thought to hold clues to the history of our Solar system.

On October 16, NASA launched Lucy, the first space mission to study the faraway asteroids, from the Kennedy Space Centre in Florida

Among the guests was Dr Holt, who had been working to discern the relationship between the Trojans.

“In my latest paper, I used astrocladistics to look at how the Trojans are related to one another,” Dr Holt said.

“I found they cluster into clans, with groups of similar properties, like colours and dynamics.

“Not only does this establish this technique in planetary science, but we also identified a set of large objects for future observations.”

Completing his PhD remotely in Colorado, Dr Holt’s work was part of a wide range of information used to select Trojan targets for the mission.

Lucy will complete a 12-year journey to eight of the asteroids, providing information on all three major types of celestial bodies in the clusters.

“Within the objects Lucy is visiting, there are a variety of asteroids, including the remnants of a catastrophic collision and a binary system,” Dr Holt said.

“Some of these are the first time we are seeing these asteroid types up close; it's going to be interesting to see these for the first time.

“To know that my work is now contributing to better the story of our Solar system, and in turn, our own story is a remarkable feeling.

“Lucy is going to tell us so much about the early Solar system and it was fantastic to be there to wish her well.”

Dr Holt also had another reason to celebrate.

“I finished my PhD recently, and handed in the final paperwork last week,” he said.

“I’m now helping mentor students at the University of Southern Queensland while I find a Postdoc position.”

Are you fascinated by the universe? The University of Southern Queensland’s Bachelor of Science (Astronomical and Space Sciences) major helps students develop their professional knowledge and skills in stellar astrophysics, planetary science, solar physics, space science and physics, while providing research project experience.

Find out about studying a Bachelor of Science (Astronomical and Space Sciences). 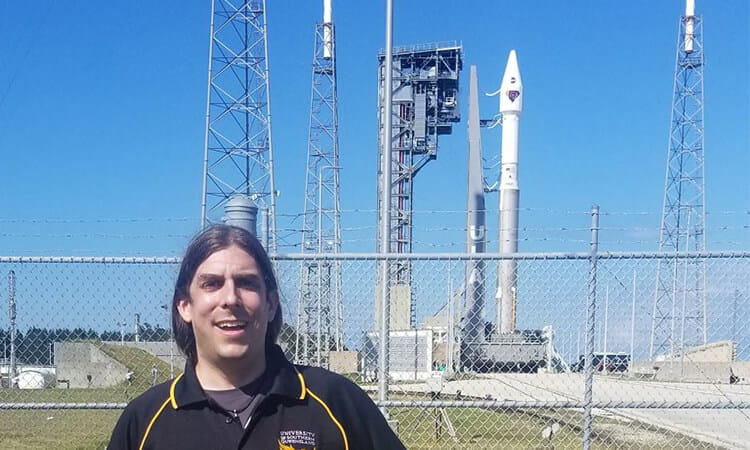 On October 16, NASA launched Lucy, the first space mission to study the faraway asteroids, from the Kennedy Space Centre in Florida