Whether it was moving to a different country to study or learning a second language, Argentine-born Pili Galardi is not one to shy away from a challenge.

The University of Southern Queensland paramedic graduate will face perhaps her biggest test yet when she jets off to the UK on Wednesday (October 27) to join one of the world’s largest and busiest ambulance services.

Ms Galardi has landed a job with the London Ambulance Service where she will reunite with her friend and fellow University of Southern Queensland graduate Byron Reid.

“This is a whole new adventure for me,” she said.

“I’m very excited to be launching my career in paramedicine and working with the London Ambulance Service, which attends more than 3000 emergencies a day.

“On the other hand, I’m sad I’m leaving Australia because I have created a new home here and met so many wonderful people.”

Ms Galardi moved from Buenos Aires to Ipswich in February 2018 and started a Bachelor of Paramedicine less than a week after jumping off the plane.

Despite having to learn English prior to arriving in the country, she excelled in all her courses, graduating earlier this year with a GPA of 6.42.

“I remember it took a little time for me to settle in,” she said.

“Moving to a completely different place and culture, trying to make friends and adjusting to speaking and reading English, it was pretty exhausting.

“However, my time at UniSQ was absolutely wonderful.

“From the first day I got here, all the staff and lectures were very supportive and encouraged me the entire way.”

Ms Galardi, who has also completed a degree in international trade, said she wanted to pursue a career in paramedicine so she could help people during difficult times.

“Long before I started thinking about becoming a paramedic, one of my friends was having a few panic episodes and I always felt useless because I didn’t know what I could do to help,” she said.

“It inspired me to do a first aid course with the Argentine Red Cross.

“I went on to do an EMT (Emergency Medical Technician) course and one of the requirements was you had to do some training with the ambulance service in Buenos Aires.

“I really enjoyed it and that’s when I started thinking about paramedicine, but there are no paramedics in Argentina, as in order to work in the ambulance you need to be a doctor.

“Knowing you are doing some good in the world and providing hope to patients who need help are the most rewarding parts of the job.”

Although it has been more than three years since she left home, and almost two years since she has seen her family due to COVID-19 travel restrictions, Ms Galardi said her university journey and job success wouldn’t have been possible with the support of her family.

“My parents are the reason why I’m here,” she said.

“They were the ones who gave me this chance, so I was determined to not let it go to waste.

“My whole family is excited about me going to London because they know how hard I have worked for it.”

Learn more about studying Paramedicine at the University of Southern Queensland. 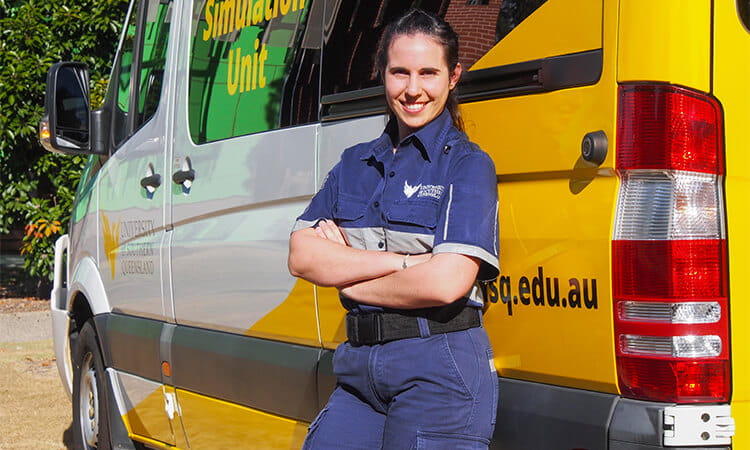 University of Southern Queensland graduate Pili Galardi has scored a job with the London Ambulance Service.