A planet with extreme seasons and aluminium rain sounds like something from the pages of a science fiction novel – but this is the reality on newly discovered exoplanet TOI-3362 b.

Scientists at the University of Southern Queensland, including graduate student Alexis Heitzmann and astrophysics lecturer Dr George Zhou, were among the team of international researchers working to piece together the nature of this gas giant.

Led by Pennsylvania State University graduate Jiayin Dong, the research centred on the planet’s unusual elliptical orbit of a nearby star, a phenomenon only seen in action twice before.

Mr Heitzmann said the team had caught the planet in the act of migration, moving from a wide circular orbit to one much closer to the star.

“It's like looking at a flock of migratory birds - most of the time you see them wading in the water or on far off islands,” Mr Heitzmann said.

“Every now and then, you see a flock flying overhead – on the move.

“TOI-3362 b is one such planet caught in the act of migration, where its eccentric orbit is a transitional stage.

“If this is indeed the case, it is a great advance towards solving the mystery of how very close orbit giant exoplanets are formed.

“Its uniqueness also renders it a privileged target for future atmospheric studies using the soon to be launched James Webb Space Telescope.”

Unlike planets which follow a circular orbit, TOI-3362 b’s highly elliptical trajectory results in dramatic temperature changes over a year on the planet, which is only 18.1 days long.

“The planet experiences a surface temperature of more than 2200 degrees in the summer and its winters are, in contrast, only around 500 degrees,” Mr Heitzmann said.

“Due to this extreme difference of temperature on the planet, aluminium present in TOI-3362 b’s atmosphere evaporates, forming clouds in summer which rain down in winter.

“This is more than fun speculation, it's something we can measure - we plan to use some of the biggest telescopes on Earth to peek at the atmosphere of TOI-3362 b.”

The University of Southern Queensland’s MINERVA-Australis facility at Mount Kent Observatory was instrumental in the planet’s discovery, providing a significant portion of the observations for the study.

“The University of Southern Queensland is in partnership with NASA JPL to provide the US astronomical community with access to MINERVA-Australis,” Mr Heitzmann said.

“This is the first major result to be published from this new partnership.

“We run Australia's only set of telescopes dedicated to studying planets around other stars.

“Collaborating with our colleagues at the Pennsylvania State University, we discovered the planet TOI-3362 b using NASA's Transiting Exoplanet Survey Satellite space telescope.

“We then used MINERVA-Australis to confirm the orbit of the planet, revealing the highly unusual path the planet follows.”

In the far future, TOI-3362 b is expected to become a “hot Jupiter,” a Jupiter-sized planet located extremely close to its host star, which it will completely orbit every few days.

Learn more about the University of Southern Queensland’s Centre for Astrophysics. 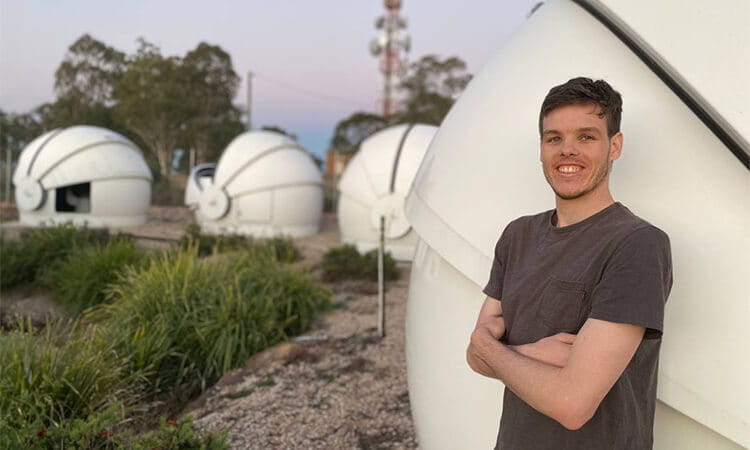