What we learned from a close-up look at Hayabusa2

It was one of the biggest space events of 2020 and a team of University of Southern Queensland scientists had front row seats.

Eyes were peeled to the skies as Japan’s Hayabusa2, and its space capsule carrying asteroid samples, returned to Earth above outback Australia in the early hours of December 6.

Also in the air that night, University of Southern Queensland hypersonic and astrophysics experts on board an observation flight, each using specialist equipment to capture important data related to the re-entry.

Since that scientific adventure, project lead and technical expert Dr Fabian Zander and his team have pored over their data, knowing its great potential for future space science research (including aerothermodynamics design).

“This was the first ever non-NASA airborne observation of a re-entry object,” Dr Zander said.

“The re-entry provided a new, rare opportunity to collect data on the aerothermochemistry of a high-speed capsule entering the atmosphere.

“We flew out of Toowoomba Wellcamp Airport, Queensland in a Falcon 900 jet organised by Rocket Technologies International and operated by Navair.

“The team flew down to the Strezlecki Desert before beginning a straight run heading north-northwest for the observation.

“With the capsule in sight, our array of visible/near-infrared spectral instruments tracked it and recorded data during the re-entry.

“Analysis of the data demonstrates acquisition of plasma emissions from the shock layer (nitrogen and oxygen lines are clearly identified) superimposed on the black body radiation from the capsule.

“It was a great success by the team, especially given the uncertain trajectory of Hayabusa2.”

“The success of the Hayabusa2 observation mission has initiated discussions between the team and the European Space Agency, and other associated entities, about the observation of future re-entries,” Professor Schubel said.

“There are also ongoing discussions with US collaborators and Australian Defence, who are very interested in developing this capability further.” 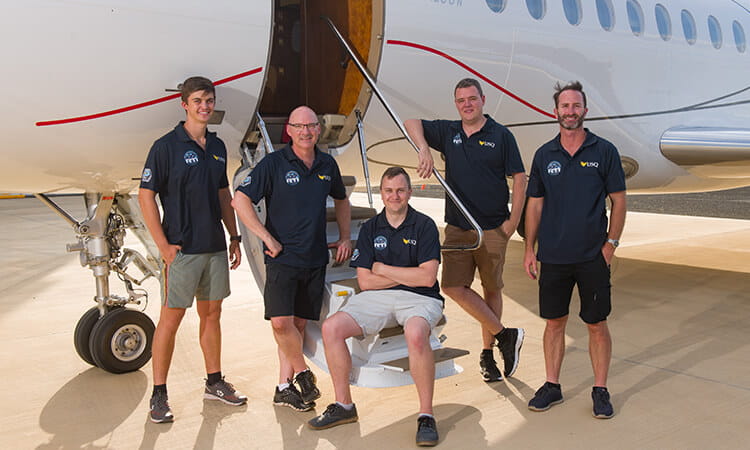