Be it among the stars or in the faces of the countless children he saved, John Grant-Thomson sought and found the true meaning of invention.
TAGS:
Vice-Chancellor, Engineering

The University of Southern Queensland has farewelled a giant of electrical and medical engineering with the passing of alumnus and former staff member Emeritus Professor John Grant-Thomson AM.

A major achievement in his distinguished career was the invention of the Neocot, an intensive care system to transport critically-ill neonatal and paediatric infants from their birthplace to a major hospital for specialist management.

First used in 2000, the device is now used to retrieve hundreds of babies every month in all Australian states and territories, as well as Norway and Sweden.

Vice-Chancellor Professor Geraldine Mackenzie said John Grant-Thomson’s academic contribution to biomedical engineering was undeniable but it was his dedication to making the world a better place that was truly inspiring.

“As John himself explained in an episode of the ABC’s Australian Story just last year, “What is engineering for if it is not helping people?”

“Even after his retirement from the University in 2003, as an Honorary Professor John remained passionate about teaching the next generation and mentoring students to help them reach their potential.

“Our thoughts are with his family and friends and I hope they find comfort in reflecting on the countless lives he impacted for the better.”

“The Neocot itself was designed while he was working with engineering students at the University of Southern Queensland in 2000,” Professor Mackenzie said.

“This development flowed from another of his inventions, the MIRF (Mobile Intensive Care Facility) developed for the Australian military.”

In the 1960s, John Grant-Thomson was part of the NASA team that established the Toowoomba Cooby Creek Tracking Station to research experimental satellite communication systems.

He championed a permanent reminder to the people of Toowoomba who supported those NASA engineering teams with a commemorative antenna on the Toowoomba campus. 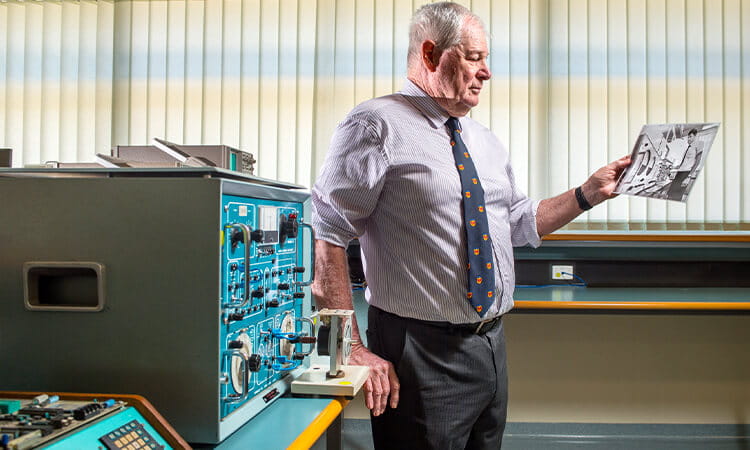