University of Southern Queensland Curator (Arts and Exhibitions) celebrates the power of the pen this World Calligraphy Day
TAGS:
Arts and Communication, Staff

Guided by his grandmother, Brodie Taylor first picked up a calligraphy pen at eight years old.

The decision would set him on a journey into the visual art, which has seen him scribe everything from invitations to an official document presented to the Queen’s representative.

Today, on World Calligraphy Day, the University of Southern Queensland Curator (Arts and Exhibitions) has paid tribute to the age-old skill.

“In a world of digital reproduction, singular pieces like this of true artistic expression through the written word are more important than ever,” Mr Taylor said.

“A big part of my role is making sure documents have the grandiosity and atmosphere befitting of their context, while also paying homage to the writers that have passed.

“It’s very therapeutic and when it does come together, it’s satisfying to watch.”

He said while calligraphy had been popular throughout the centuries, particularly in the early 1900s, the advent of the digital age had seen its decline.

“Before the days of mechanical reproduction by printers, documents were handwritten,” he said.

“It was an art form, but one that was used quite often.

“But as the years have gone on, and the more technology has permeated our lives, hand drawn pieces have become more of an artisan skill rather than a commodity.

“However, the fact it has become quite rare is also one of its beautiful aspects - I think there is a heightened appreciation for calligraphy as it’s not something you see often.”

Mr Taylor said despite its rarity, calligraphy was a skill open to all.

“It’s never too late to pick it up and once you learn the simple techniques, it really unlocks a new world,” he said.

“Quite often, artists live their practice in their personal lives as well.

“You can’t take back a stroke of your pen, and that’s similar in life, where you must be mindful of what you do next.” 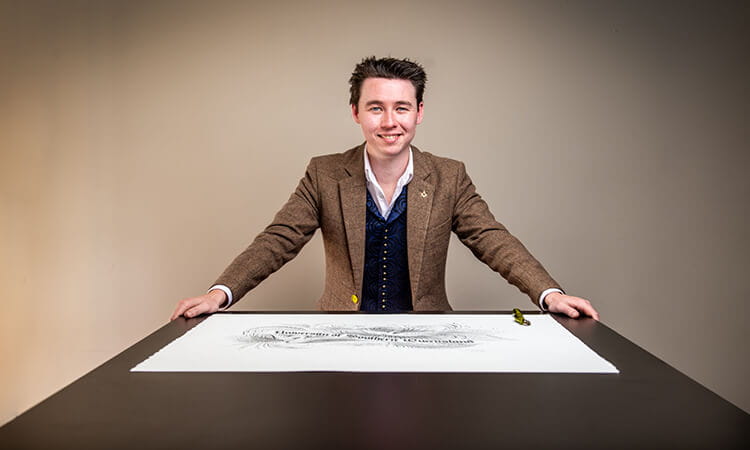