Nearly half a million in funding for flora, fauna and…fungi

Fungi – it can be found on trees (or even in bathrooms) but new research is showing that a particular type can be a game-changer for plants’ resistance to pesky insects.

University of Southern Queensland research into the essential role of fungal biodiversity to the future of agriculture has been recognised by the Federal Government’s Australian Research Council (ARC).

Ecologist Dr Adam Frew will receive $453,582 to further his work into using fungi to enhance plant resistance to insects.

It is part of the $83 million announced this week for projects led by emerging researchers across the country under the ARC Discovery Early Career Researcher Award scheme.

“We’re looking into how the diversity of beneficial fungi in soil is impacted by agricultural management and how fungi can affect plant defences,” Dr Frew said.

“If we understand these interactions better, we are closer to being able to use the fungi to help crop plants access soil nutrients and defend themselves from attack.

“This may mean we can reduce fertiliser and pesticide inputs, which can be damaging to soil biology, thus ensuring the sustainability of crop production into the future.”

“We’re building on past research by others that has shown that fungi in the soil can create networks between plants, even allowing them to transmit information to each other,” he said.

“We are researching which fungal species might be best suited to a particular plant group or a particular soil type, to help improve and protect them.”

“This is an example of innovative research undertaken by the University that contributes to industry and benefits our communities and the nation,” Professor Mackenzie said.

Find out more about studying a Bachelor of Science (Environment and Sustainability). Details about the DECRA scheme can be found here. 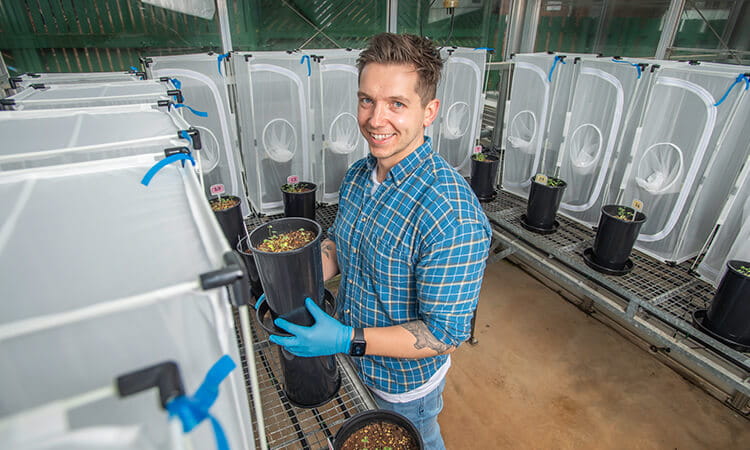 Ecologist Dr Adam Frew will receive $453,582 to further his work into using fungi to enhance plant resistance to insects.