For over 350 million years, a war has raged between plants and the insects that eat them.

University of Southern Queensland researcher Dr Adam Frew has always been interested in this interaction, and now his research has earned him a prestigious Queensland 2021 Young Tall Poppy Science Award.

Dr Frew said he was delighted to have been nominated for the academic award, which recognises the achievements of “Australia’s outstanding young scientific researchers”.

“I couldn’t believe it, I wasn’t expecting to win,” he said.

“I was surprised when I received the email – but it was really nice for my work to be recognised.”

For the past few years, Dr Frew has been studying the role of fungi in regulating plants’ defence systems.

“Past research by others has shown that fungi in the soil can create networks between plants, even allowing them to transmit information to each other via fungal hyphae,” Dr Frew said.

“So, if a plant is being attacked by insects it can communicate this through the hyphae, which causes neighbouring plants to upregulate their defences.”

He said his research focused on the defence responses and how different fungal species interact with different plants.

“There are potentially thousands of species of these fungi – and some are better than others at defending the plant,” he said.

“So that’s why the biodiversity of the fungi is really important – and it’s something we don’t know much about when it comes to plant defence.

“We want to find which fungal species might be suited to a particular plant group or a particular soil type, to help improve and protect them.”

This research could have far reaching benefits, according to Dr Frew.

“The goal at the end would be for us to be able to manage this group of fungi in a way that could boost plant defence and conserve the soil at the same time,” he said.

“Then we could lessen the use of pesticides and rely more on protection from natural organisms in the soil, which have co-evolved with plants.”

As a Young Tall Poppy Science Award recipient, Dr Frew will take part in an education and community outreach program, to help inspire students to enter the world of STEM.

Do you want an exciting career in sustainability and the broader ‘green’ professions?

With a focus on climatology, ecology and conservation, the University of Southern Queensland’s Bachelor of Science (Environment and Sustainability) is designed for those wanting to explore environmental science, biodiversity conservation, climate change mitigation and adaptation and natural resource management for a more sustainable future.

Find out more about studying a Bachelor of Science (Environment and Sustainability). 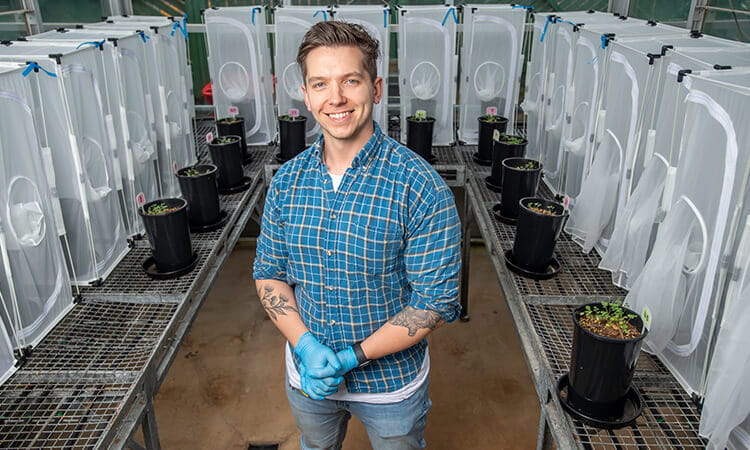