University of Southern Queensland students have been awarded the Commissioner’s Certificate for their actions at a house fire.
TAGS:
Awards, Students

When three University of Southern Queensland students decided to form a study group ahead of their 2018 exams, they had little idea how important the decision would prove to be.

Last week, Christina Harris, Maddison Jennings and Isabella King were awarded a Commissioner’s Certificate to honour their brave actions at the scene of a house fire.

Mrs Harris said the group had been studying at Ms King’s Middle Ridge home in 2018, when they noticed suspicious activity outside a neighbouring property.

“We suddenly heard the breaking of glass – it sounded like gunfire because it was so loud,” Mrs Harris said.

“We looked across the road and could see smoke coming from a house.

“We ran across and found a young man out there, who was trying to pull pets out of the home.”

With the fire burning out of control, the trio worked together to call emergency services, secure the area and direct traffic.

“There was definitely a bit of adrenaline pumping,” Mrs Harris said.

“My heart was racing as we went from home to home, knocking on doors and making sure people were evacuated.”

Emergency services personnel arrived on scene shortly after and thanked the women for their help.

“You don’t go to a study group thinking this will be the outcome,” Mrs Harris said.

“In the moment, we all came together to help out – the experience has made us closer as friends.

“Thankfully none of us had exams the next day.”

Now, three years on, the students attended the Darling Downs District Medals and Awards Ceremony to receive their Commissioner’s Certificate.

“Maddie received a call from one of the detectives saying he would like to honour us with a nomination,” Mrs Harris said.

“I think they were appreciative that we had acted so quickly.

“We were surprised when we learnt we would be receiving the certificate, but it was also a proud moment for us all.”

Mrs Harris, who was studying a Bachelor of Science, also passed her exams, and went on to win a faculty medal.

She is now doing her honours project on soil security at the University.

University of Southern Queensland Vice-Chancellor Professor Geraldine Mackenzie commended the students on their bravery – going above and beyond to make a difference.

“We are proud of our students for showing initiative, compassion and courage during this trying situation,” Professor Mackenzie said.

“We congratulate Christina, Maddison and Isabella on their award and wish them well in their future endeavours.” 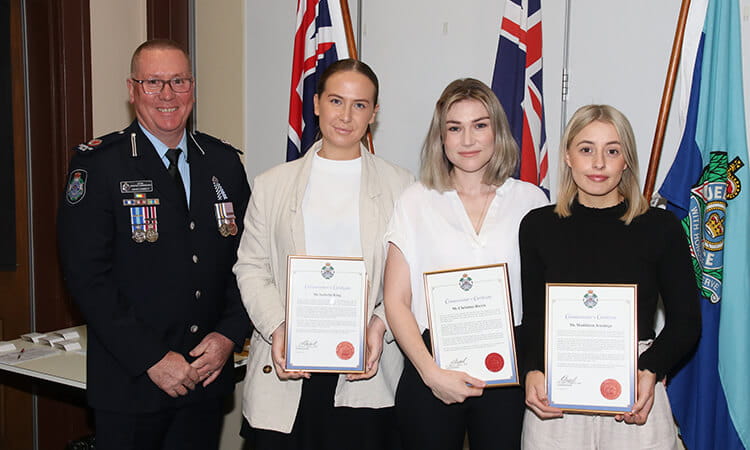