To Mars and beyond

As one of our closest planetary neighbours, Mars has served as a source of legends since the first storytellers slept under the stars.

Dr Graziella Caprarelli’s fascination with the Red Planet has forged more than 20 years of research and resulted in her joining a team to discover lakes of salty water on Mars.

This month, representing the University of Southern Queensland, Dr Caprarelli was named ‘Scientist of the Year’ at the 2021 Australian Space Awards.

“I am over the Moon, or should I say Mars, that the fruits of so much work, determination, grit and perseverance were recognised by my colleagues and other Australian professionals working across the space sector,” Dr Caprarelli said.

“I hope with this recognition comes the possibility to take more people with me to Mars, by motivating them and paving the way for their direct participation in Mars exploration missions.”

For Dr Caprarelli the love for space started as a child rugged up during long Italian winter nights armed only with a pair of binoculars on her family’s balcony.

“I have always dreamt of setting foot on the Moon or on Mars,” Dr Caprarelli said.

The geophysicist grew up in a world of sci-fi stories and it was the tantalising feeling that Mars was within reach that spurred decades of research.

“I started working in space research almost 20 years ago, when I started researching the Columbia River Group Basalt in North-West America as analogues of Martian volcanic rocks,” she said.

From there, the research took her to the NASA Johnson Space Centre in Houston and the International Research School of Planetary Sciences (Italy) where she joined the Mars Express Co-Investigator Team for the High Resolution Stereo Camera experiment.

“I was subsequently invited to join the Mars Express Principal Investigator Team for the Mars Advanced Radar for Subsurface and Ionosphere Sounding (MARSIS), and the rest is history,” she said.

“Last year, as a member of the MARSIS Team, I contributed to the discovery of liquid salty water at the base of the South Polar cap of Mars.”

Dr Caprarelli is an adjunct research fellow at the University of Southern Queensland’s Centre for Astrophysics.

“There is a strong commitment to excellence at the University of Southern Queensland, and I love how emphasis is placed on mentoring early career staff and students, as well as the supportive environment for all staff,” she said.

“I am immensely honoured that I could represent the University of Southern Queensland for these awards. I look forward to more exciting news from UniSQ’s space research.”

The University of Southern Queensland was well represented at the 2021 Australian Space Awards which recognised the leading individuals and businesses driving the development of Australia’s space economy.

The University was a finalist for ‘Organisation of the Year’ and Professor David Buttsworth (Thermofluids Engineering) and Dr Duncan Wright (Astrophysics) were also shortlisted in the categories of ‘Researcher of the Year’ and ‘Academic of the Year’.

Find out more about the University of Southern Queensland’s space research. 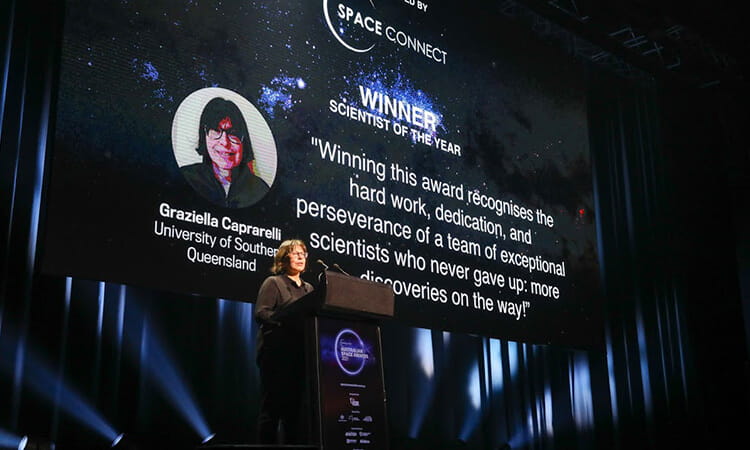