“I felt like I belonged in the sky more than on the ground” – Eliza Terry
TAGS:
Aviation, Students

A University of Southern Queensland Aviation student is preparing to take flight after landing her dream job.

Eliza Terry has been offered a place as a pilot for the Royal Australian Air Force and will shortly head to Victoria to start her training.

The offer is a culmination of years of hard work for the aspiring pilot.

“There were aptitude exams, medicals and fitness tests, and then you had to be interviewed by an officer selection board,” Ms Terry said

“So I was stoked when I received the offer, sometimes it can take years.

“I like how regimented the Air Force is, and the type of opportunities it provides.”

Ms Terry said she had been interested in planes and aviation from a young age.

“I grew up on a property near Hughenden and most out there have an airstrip,” she said.

“Lots of people had livestock agistment on our property and would fly over.

“I remember when I was eight I built up the courage to ask my mum if I could take a ride in one of the planes.

“I went for my first flight and I thought it was absolutely amazing - I think at that point I felt like I belonged in the sky more than on the ground.”

In 2018, Ms Terry started a degree in Aviation at the University of Southern Queensland.

“If I hadn’t come to the University, I have no idea what I would be doing – so it really was a stepping stone for me,” she said.

“My aviation professor Paul Bates was with the Air Force for a number of years and was my main inspiration for applying.

“I think the Air Force is the perfect place for Eliza – she’s someone who has a lot of skills and is competitive, which will work nicely in her new role,” Professor Bates said.

“I wish her all the best for the future.”

The University of Southern Queensland is the only university in the country to house both an Airbus and Boeing simulator and offer simulated flying experience in the first year of study.

If you’re looking to start a sky-high career, fasten your seatbelt and join a Bachelor of Aviation at the University of Southern Queensland. 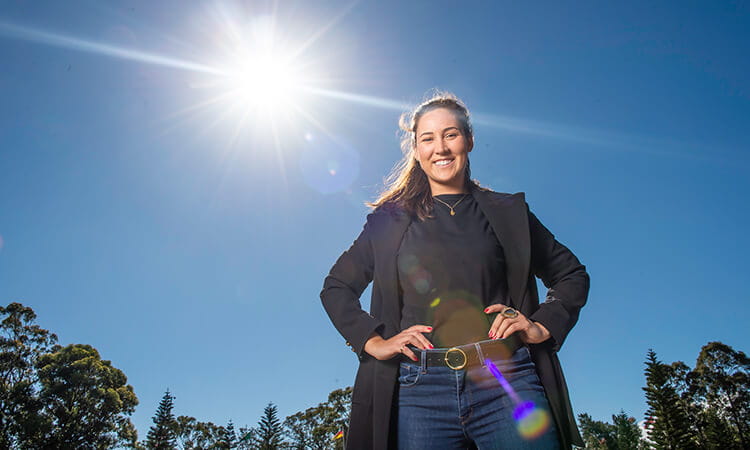 University of Southern Queensland Aviation student Eliza Terry has been offered a place as a pilot for the Royal Australian Air Force.