The wonder of space shared in National Storytime

As an astronaut read a book from the International Space Station to more than a million kids, University of Southern Queensland researchers and even our own Vice-Chancellor, joined in on National Simultaneous Storytime (NSS).

The event, organised by the Australian Library and Information Association, was aimed at getting more children reading by gathering students to read a book simultaneously in libraries, schools, and other venues around the country.

University of Southern Queensland Astrophysicist Jake Clark entertained more than 150 Darling Heights State School students with a very interactive reading of the book ‘Give Me Some Space’ which included planet jokes and question time.

“The story was about a little girl Una who grows up wanting to be an astronaut,” Jake said.

“I wanted to be an astronaut but was too tall so decided to research the universe instead.”

For Jake, the importance of reading and showing what was possible for young people was the reason he jumped at the chance to be involved.

“I think planting the seed for the next generation of Australians is so important,” he said.

“You can’t be what you can’t see, so this was an opportunity to show students that you can study astronomy and work with the biggest names, like NASA, right here on your doorstep.”

The University of Southern Queensland Vice-Chancellor Professor Geraldine Mackenzie also joined in on the national event with some special members of the audience, her grandsons Charlie and Arthur, at Goodstart Early Learning.

At the University of Southern Queensland Springfield campus, Year 1 students from Staines Memorial College took part in science and technology, music and dance, and art and craft activities following the story.

Education lecturer Kylie Meyer, who has helped organise NSS events at the University since 2018, said supporting early literacy initiatives like NSS was a great way for the University to promote children’s learning and development.

“We are extremely proud to be involved in an event that has a positive impact on children’s literacy levels and other foundational skills known to be important to reading,” Ms Meyer said.

“It is also a chance for our pre-service teachers to get involved in educational activities they might be implementing themselves once they graduate and start teaching.” 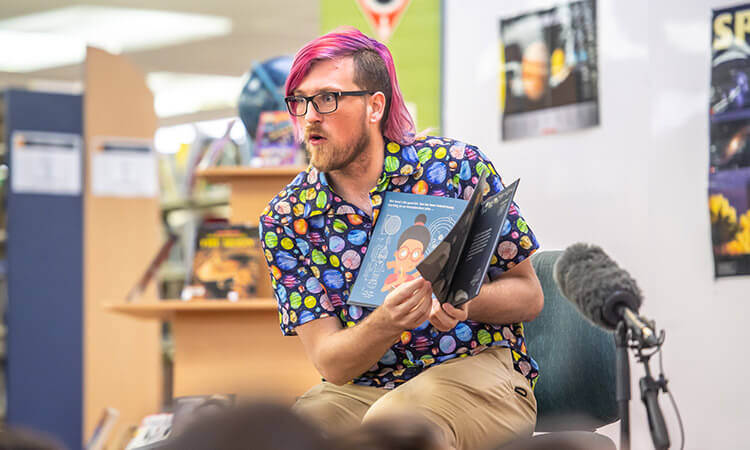