Unexplored Aboriginal rock art to share secrets of the past

It’s one of the richest bodies of rock art in the world but parts of the Laura Sandstone Basin in Queensland’s Cape York Peninsula have been virtually unexplored by archaeologists – until now.

As one of 11 specialists from around Australia, University of Southern Queensland Professor of Archaeology/Anthropology Bryce Barker is a Chief Investigator on a research project, that promises to have profound findings about Australia’s past through the recording of unique rock art.

“This rock art documents the life-ways of generations of Aboriginal Australians from their original settlement, through major environmental changes to European invasion,” Professor Barker said.

“The project has potential implications for our understanding of the cultural behaviour and dispersal of the earliest modern humans to colonise eastern Australia, which makes it an exciting project to collaborate on.”

Led by Griffith University as part of a $1.3 million Australian Research Council Linkage Grant, Professor Barker is a lead archaeologist and rock shelter excavation specialist in the research team and has been based in the Cape for the official start of the project.

“Much of the rock art near Laura has been explored before but to the north in the sandstone area it’s inaccessible and hasn’t been looked at from a research point of view at all,” he said.

“We know already, via helicopter surveys and knowledge from Indigenous Traditional Owners, that there are massive galleries of rock art previously not documented. We want to know exactly how old the art is and find out how old the occupation of the area is by doing some archaeological excavation and direct dating of the art.”

The research team has been meeting with the Traditional Owners, who jointly manage the area with National Parks, for more than two years.

“It’s been crucial to cement that relationship so we can work hand in glove to properly conduct the cultural mapping work, record cultural heritage sites and identify important conservation issues,” Professor Barker said.

“One of the main aspects of this project is to document the art and develop an online database for Indigenous rangers, and parks and wildlife staff. We’ll also create 3D models for specific sites as the basis for long-term monitoring which is incredibly important.

“Ultimately this is cutting edge work being undertaken in 2021 but steeped in stories thousands of years old.

“It makes me very proud to be representing UniSQ as part of such an important investigation. We might be a regional university but we’re leaders in this space, known for asking big questions with global impact.”

Find out more about Archaeology at UniSQ. 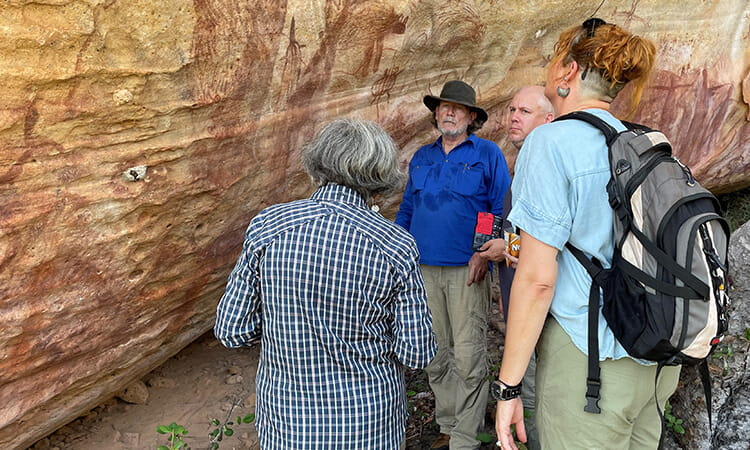