Like all animals in the wild, yellow-footed rock-wallabies have an innate fight or flight reflex – learned behaviours to keep them safe from predators.
TAGS:
Agriculture and Environment, Research

What are the long-term impacts on the fluffy marsupials when a threat is reduced or removed?

Wildlife researcher Dr Deane Smith has delved into the impacts of exclusion fencing on non-target species as part of his University of Southern Queensland PhD project, which included travel to Quilpie in south-west Queensland to explore the positive and negative effects of the man-made structures on colonies of yellow-footed rock-wallabies.

Dr Smith said the fences had been established to remove pest species from the area, many of which were the wallabies’ natural predators and competitors.

“We wanted to determine whether or not these wallabies were using the habitat differently inside and outside of the fencing,” Dr Deane said.

“There appeared to be little difference in behavioural expression.

Dr Smith also performed a DNA analysis on the animals.

“I took genetic data from wallabies on both sides of the fence as I wanted to see if there was a close familial relationship which had been interrupted,” he said.

“I did find those familial links, which means the fence could be affecting their dispersal movements.

“One of the potential consequences of the fences, especially in a conservation regard, is that protected animals lose their predator avoidance behaviour, which would make them vulnerable should the fences be removed.”

While the economic and agricultural benefits of the fences are often studied, Dr Smith said the impact on other wildlife in the surrounding ecosystem was sometimes unclear.

“My findings showed there was the potential for both positive and negative impacts, but longer-term studies are needed to figure out if the fences have an overall net positive or negative effect on different species,” he said.

“It’s important to study the fences because of their potential conservation value, but also to make sure they are not causing more harm than good.”

University of Southern Queensland wildlife researcher Dr Ben Allen was one of the supervisors on the project.

“In the last 10 years there has been a big increase in predator-proof fencing in Western Queensland,” Dr Allen said.

“We want to make sure we can harness the benefits and avoid the potential costs.

“Although this project was focused on rock-wallabies, we’re now starting to look at the fences’ impacts on other species, including threatened reptiles, birds and other mammals.

“Given what we know about the success of exclusion fences in getting rid of competitors and predators, there exists a great opportunity to reintroduce or translocate animals that are locally extinct from this area.”

With his studies complete, Dr Smith has now started a new job with a conservation and wildlife management company in Adelaide.

With a focus on climatology, ecology and conservation, the Bachelor of Science Environment and Sustainability major at the University of Southern Queensland is designed for those wanting to explore environmental science, biodiversity conservation, climate change mitigation and adaptation, and natural resource management.

Find out more about studying Bachelor of Science (Environment and Sustainability). 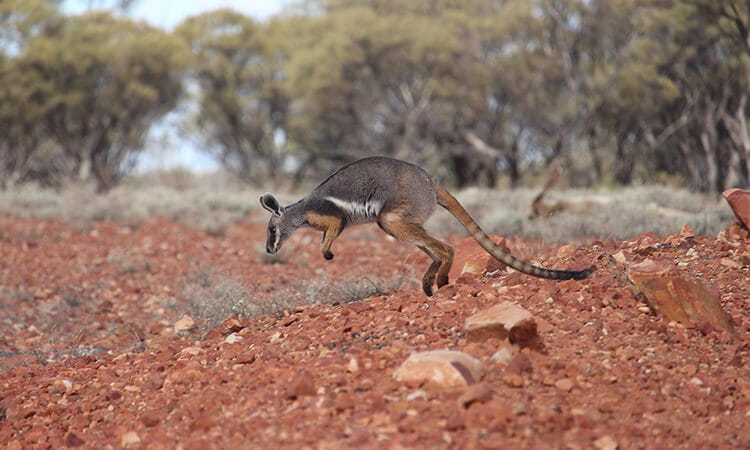 Dr Smith has been examining yellow-footed rock-wallabies during the project.