When Michael Rook attended a Winter Maths School at the University of Southern Queensland as a Year 12 student in 1987, he couldn’t have known that the week of study would kick off a chain of events that would shape his life.

“Being from the Sunshine Coast, I had the opportunity to stay on campus at USQ to attend the Maths School which gave me my first experience of college life,” Mr Rook said.

“I enjoyed it all so much that it ultimately inspired me to apply to go to USQ to study a Bachelor of Mechanical Engineering. When I was accepted, I applied for McGregor College and stayed there for five-and-a-half years while I completed my Bachelor and my Masters in Mechatronics Engineering” he said.

While many students choose to move off-campus at the completion of their undergraduate degree, Michael Rook had a good reason to make McGregor College his home for a little longer.

“In 1991, at the start of my final year of the undergrad a first-year student named Kerri moved from Kingaroy and on to H Block to study teaching,” he said.

“Kerri and I started dating not long after and in June of this year, we’ll have been together for 30 years, married for 22.

“My time at USQ and equally as important, my time at McGregor College, have served me with some wonderful memories and outcomes – not least of all, my wife and now, our two children.”

Recently turning 50 years old, Michael and Kerri Rook will celebrate another 50th this year – the 50th Anniversary of McGregor College.

The milestone will be celebrated at a formal reunion dinner on Saturday the 24th of July 2021 at the USQ Refectory.

Alumni, current residents and USQ staff who have made a connection to McGregor over the past five decades are invited to attend.

To further mark the occasion, the McGregor 50th Anniversary Endowment Fund will also be officially launched at the reunion dinner.

USQ Director (Development) Stephen Holden said the endowment fund will be designed to provide a $2,000 scholarship for a first-year student demonstrating need who has been accepted to live on campus at McGregor College.

“We are appealing to all past connections of McGregor College to consider donating to the Endowment Fund as a way to ensure future generations of students also have the same opportunity to make the lifelong connections on campus as they did,” Mr Holden said. 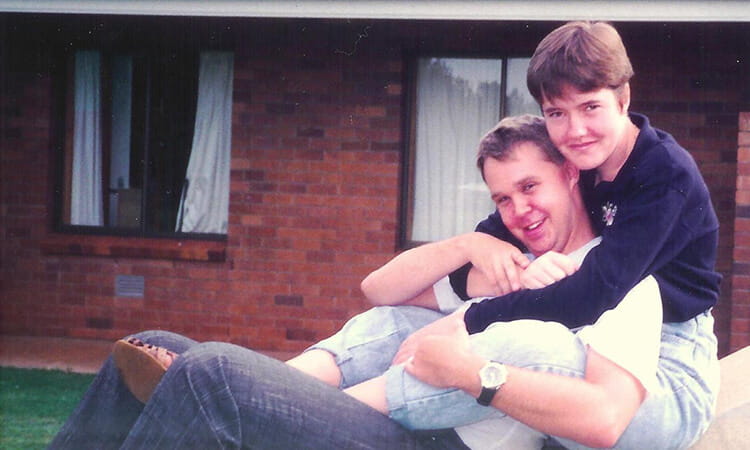 Michael Rook and his girlfriend – now wife – Kerri outside McGregor College in 1991.