Cheers to the Beers: Husband and wife celebrate their graduation success together

Andrew and Kirsten Beer might just be taking their ‘til death do us part’ vows a little too seriously.
TAGS:
Alumni, Graduations

They started the same degree at the same time, took the same subjects and even attended the same classes together.

Now the inseparable Ipswich couple have celebrated their graduation success together.

The University of Southern Queensland graduates marked the end of their four years of studies at a special ceremony in Toowoomba yesterday (April 14).

“This was a huge achievement for us,” Kirsten said.

“We both worked full-time and had our daughter Audrey during our studies, so to get our degrees and complete this goal together was very fulfilling.

“We pushed each other to do better and we gave it everything. It was a real team effort.”

Andrew and Kirsten Beer met in 2012 and married in 2015. The following year, they enrolled in a Bachelor of Nursing at the University’s Ipswich campus.

Andrew said attending the same classes brought them closer together and allowed them to challenge and encourage each other.

“We enjoyed studying together,” he said.

“If one of us was struggling in a particular area or couldn’t grasp a concept, we would work it out together. It was like having a permanent study mate living with you.

“I don’t think we could have done as well as we did without the other one.”

She arrived less than two weeks before the start of their semester two exams.

“Audrey was born early because I was diagnosed with obstetric cholestasis,” Kirsten said.

“The midwives threw it on us unexpectedly ‘you will be having your baby today’ and I remember the first thing I said was ‘but I have exams coming up’.

“Audrey stayed in the Special Care Unit for nearly three weeks after she was born, while I also had to stay in hospital because of my condition.

“I was thinking about dropping the exams, but I felt I had done enough studying, so I decided to discharge myself and drove straight from the hospital to the exam room.”

And how did she go?

“(Kirsten did) better than me,” Andrew said.

“We are both very competitive and because we took all the same subjects, there was a healthy rivalry to see who would get better results on our assignments and exams.

“Kirsten would always beat me, but with this exam I thought for sure I would have it in the bag.”

Although they studied side-by-side, Andrew and Kirsten’s paths to university were very different.

Kirsten studied urban and environmental planning and worked as a dental assistant for eight years, while Andrew served in the Army as a combat engineer and combat rescue operator.

“In early-2016, I was deployed to Fiji to help with the recovery efforts in communities affected by Cyclone Winston,” Andrew said.

“I did some work in a hospital and when I got back I told Kirsten how much I enjoyed it and wanted to study something in the medical field like nursing.

“Kirsten had also been interested in studying nursing for a while so we both decide to do it together.”

Andrew and Kirsten finished their degrees last year. Their dedication and hard work paid off when they both landed full-time positions at the Ipswich Hospital in February.

Andrew works as a graduate nurse in the Intensive Care Unit, while Kirsten is a theatre scrub nurse.

Although they aren’t working together in the same department, they’re still pretty close.

“We actually work across the hall from each other,” Kirsten said.

“We joke that Andrew should be an anaesthetic nurse so we could work in theatre together, but I think we need some distance between us.”

Enrolments for Semester 2 are now open. For more information or to apply, visit Study. 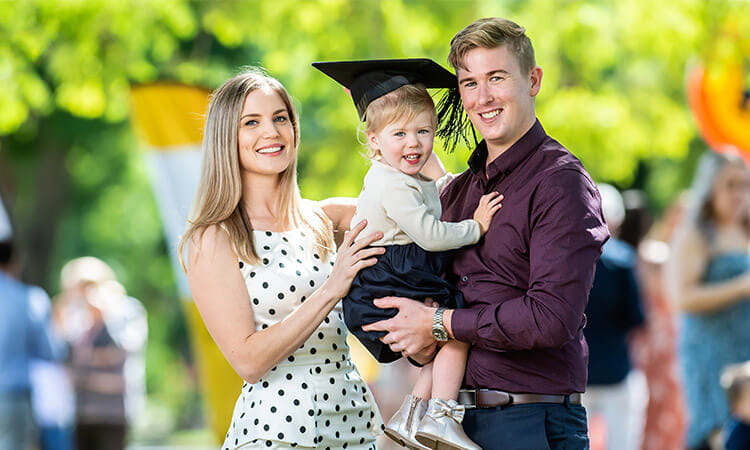 University of Southern Queensland graduates Andrew and Kirsten Beer, pictured with their daughter Audrey, have more in common than most married couples.