Amphibian research at the University of Southern Queensland has come on in leaps and bounds, thanks in part to a study by science honours student Mickayla Heinemann.
TAGS:
Environmental Sciences, Sustainability and the environment

In an Australian first, Ms Heinemann is trialling PVC and bamboo pipes as a technique for collecting frogs, connecting the pipes up into trees in different habitats.

“As many people probably know, a lot of tree frog species like to hang out in drainpipes around our homes, using them to enhance their vocalisations during the breeding season.

“The tree pipe method helps to offer a new refuge area for the frogs, which will enhance their vocalisations while allowing us to survey them.”

Ms Heinemann made the jump into amphibian research after growing up in North Queensland.

“There are a lot of green tree frogs up there with the weather,” she said.

“From a young age I have always been around them, I saw them in the backyards, the drainpipes and the toilets – I was always amazed at the weird places they could live.”

As part of her honours project, Ms Heinemann is also looking at ways to improve traditional survey methods.

“I’m investigating the use of light as a way to enhance pitfall trapping,” she said.

“Using artificial light above a pitfall trap, which is essentially a little hole in the ground, we attract insects and, as the frogs walk along trying to get to their little snack, they fall into the hole.

“We need to improve our survey methods so we can get better data on the frogs in our ecosystems – a lot of the traditional methods severely underestimate which frogs we have and sometimes miss out whole species, such as tree frogs.

“If we don’t know about them, how can we conserve them? We need to fill in the gaps in our knowledge.”

“Frogs are a really important part of the environment and they are often neglected because people don’t like them or are unaware of them,” Associate Professor Murray said.

“The traditional methods for surveying frogs include going out at night with a torch, recording vocalisations and putting a pipe in the ground and waiting for frogs to fall into it.

“Very pleasingly the tree pipe trap method has been a success.

“Mickayla’s project started after the rain in January and we caught less cane toads and a broader diversity of species than expected.”

With a focus on climatology, ecology and conservation, the Bachelor of Science Environment and Sustainability major at the University of Southern Queensland is designed for those wanting to explore environmental science, biodiversity conservation, climate change mitigation and adaptation, and natural resource management.

Find out more about studying Environment and Sustainability. 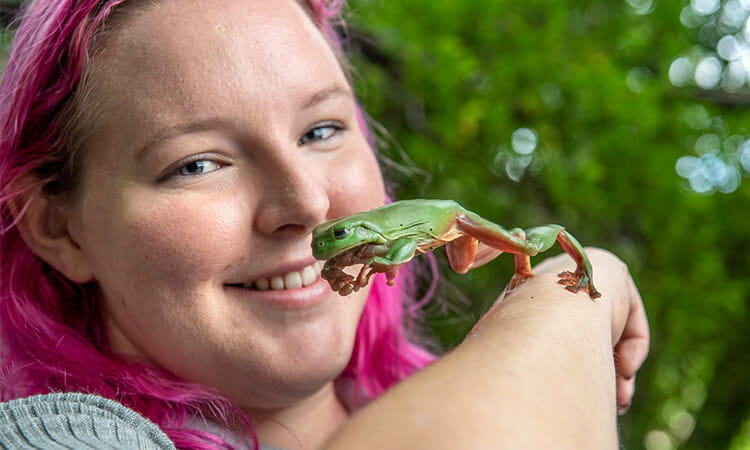 University of Southern Queensland honours student Mickayla Heinemann gets up close and personal with her research subject, a green tree frog. (USQ Photography)