Baz Luhrmann’s Romeo + Juliet at 25: is this the best Shakespeare screen adaptation?

While some praised the film as “clever and well-executed” and “genuinely inventive”, others labelled it “a very bad idea” and “a monumental disaster”. How could one film be so polarising

Lurhmann was not presenting us with a reinterpretation of the stage play, but a complete re-imagining of its universe. Gone was the sense of theatre. Gone were the long soliloquies. Gone were the 16th century costumes. Instead of Verona, Italy, we are on Verona Beach, California.

The Capulet and Montague patriarchs do business in adjacent skyscrapers while the younger generation wage a vicious war on the streets. Tattoos, gold chains, loud Hawaiian shirts, leather vests, and silver teeth adorn them. Swords are replaced with Uzis and pistols.

The soundtrack dispenses with classical strings, replaced by 90s bands such as Radiohead and Garbage. Even the “and” in the title was replaced with a + sign. In every way Lurhmann made this film scream “gangsta”. It feels dangerous.

Many critics compared the film to Franco Zeffirelli’s 1968 version of Romeo and Juliet. While Zeffirelli’s film is visually sumptuous, it still plays it safe with the material, with few changes in tone or historical period.

Lurhmann, in contrast, plays fast and loose with every element of his production. To me, the films are in different stratospheres in their approach to the material and thus totally incomparable.

Shakespeare adaptations set in different time periods had happened before Lurhmann. As You Like It (1992) was performed in an industrial wasteland. Richard III (1995), was set in 1930s Britain; and Twelfth Night, made in the same year as Luhrmann’s film, was set in Victorian times.

However, Lurhmann didn’t just take the words and characters from the stage play and insert them into new environments. He created a completely stylised pastiche of visuals, dialogue, character and action.

It’s all quite over the top, as exemplified by the scene where a drag-queened Mercutio dances to Young Hearts Run Free. This is really Shakespeare for a specific demographic — youth. Some have argued Luhrmann’s film was beloved by attention deficit teenagers who later regarded it as “embarrassing” in adulthood . But I think this simplifies things.

I can understand why traditionalists, who didn’t mind the other adaptations set in modern times, don’t like this one. Much of the humour is pure slapstick, the acting can be over-exaggerated and lines are over-emphasised. There are large parts of the film which don’t have any dialogue at all, it’s all just visuals and music.

But the onscreen chemistry between Danes and DiCaprio is electric. Their scenes are genuinely emotionally charged, often heightened by the musical accompaniment.

And Lurhmann was making a film that would appeal to those who loved or loathed, or were indifferent, to traditional Shakespeare. A Shakespeare accessible to everyone.

This can be seen in the dialogue delivery of actors such as John Leguizamo, who plays Tybalt. As he venomously spits out, in modern gangsta rap style, lines like, “Now by the stock and honour of my kin, To strike him dead I hold it not a sin”, you actually forget you are listening to words written 500 years ago.

My favourite scene has always been Mercutio’s death. In the minutes leading up to, during and after he dies, Lurhmann dispenses with glitz and glamour, concentrating solely on the engagement between DiCaprio, Harold Perrineau (Mercutio) and Leguizamo. This is raw, visceral acting, no exaggeration, no contrivance.

Some have argued making such radical changes to the text is unnecessary and harms the essence of Shakespearean drama. The nuance and poetry of Shakespeare’s language is lost in all the flash and sparkle.

But pop culture critic Tori Godfree contends that Lurhmann’s incorporation of contemporary jokes, music and pop culture into his film is exactly what Shakespeare did in the original play.

Shakespeare’s works should not be treated as sacrosanct icons but as fluid works open to reconstruction and modernisation.

Luhrmann’s approach worked. The film grossed over ten times its $14.5 million dollar budget. No other direct Shakespeare adaptation has come close to this sort of monetary success. Others have since embraced gangsta style violence in their own Shakespeare adaptions, notably Australian director Justin Kurzel, with Macbeth, and David Michod’s The King.

Romeo + Juliet catapulted Luhrmann into the A-list, where he was given free reign on his next film, Moulin Rouge. Unfortunately, I think Lurhmann’s love of visual excess overwhelmed this and his further films, which were much more focused on screen imagery and design than story, character or meaning.

Perhaps the difference with Romeo + Juliet is that Luhrmann had a great script to start with. One can justly say of this lush, loud film, “For I never saw true beauty till this night”.

Romeo + Juliet is being re-released in selected cinemas from February 11 to mark its 25th anniversary. 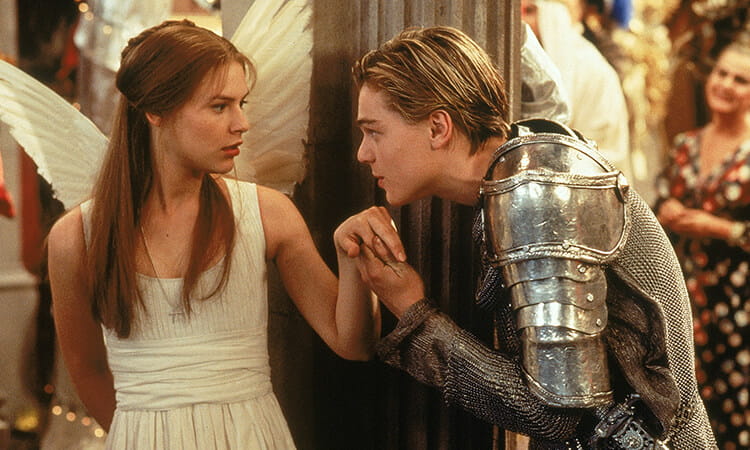