Play your part for an iconic Japanese Tea House

A symbol of both legacy and prestige, the University of Southern Queensland’s B Block Building at the entrance of the Toowoomba campus has been transformed into a cultural hub, with renovations officially unveiled in early May.

In celebration of the opening, the new University Art Gallery hosted one of its first art exhibitions, titled A Walk Amongst The Trees.

The display pays tribute to the University’s iconic Japanese Garden, which is Australia’s largest, most traditionally designed Japanese stroll garden.

“It’s a great honour to be part of a group of artists contributing to the exhibition in such a fine space as the Art Gallery,” Dr Hinchliffe said.

“I find it very pleasing that the subject devoted to this exhibition is an artistic exploration of the magnificent Japanese Garden.

“I hope that this begins a long-running association between the garden and artists.

“In time I can imagine the garden becoming an Australian version of Monet’s Gardens in Giverny which has become a magnet for art lovers.”

It’s serendipitous timing for the exhibition, as the University of Southern Queensland looks to the completion of the jewel in the crown of the beloved Japanese Garden – a Japanese Tea House.

More than 30 years ago, Dr Adrian Allen dreamed of a beautiful Japanese style garden and through a huge community effort the dream became a reality.

Today, the maturing gardens are a beautiful space of peace and tranquillity and are recognised as an emblem of the Toowoomba community – but they are not finished.

The original dream was to have a tea house by the waterside under the arc of the cherry blossoms – a place where quiet reflection and important ceremonies can take place.

In celebration of Toowoomba’s rich educational and cultural history, your support is needed to help complete this important and idyllic community space on the grounds of the University.

For more information or to donate, visit: https://www.unisq.edu.au/teahouse 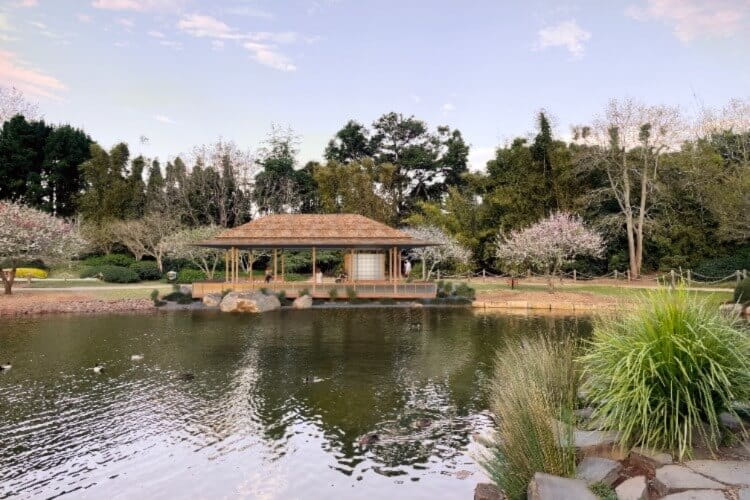